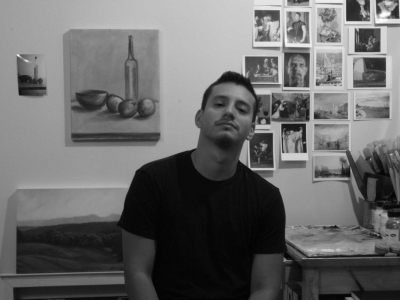 Luis Colan was born in Lima, Peru in 1980.  At age ten his family moved to Connecticut, where he continued his education from middle school through college. Attending the Hartford Art School, at the University of Hartford, Luis was influenced by artists and professors Stephen Pat Brown, Fred Wessel, and Jeremiah Patterson. It is from these mentors he learned new techniques and color theory that pushed his work further. While at the Hartford Art School, Luis was introduced to abstraction under the guidance of professor Pat Lipsky. During the short period of experimentation with abstraction he was able to further explore color and the physicality of oil paint.

After graduating in 2004 Luis moved to New York City, where he currently lives and works.  He has continued his education by taking classes at the Art Students League and the Teaching Studios of Art in Brooklyn, both schools have exposed him to the teachings of Dan Thompson, Adam Miller, Robert Zeller, and Bennett Vadnais. Working closely with these artists has allowed him to refine his ability to depict landscapes and figures. Partaking in numerous events and workshops, including Plein Air workshops in Tuscany in 2013 and 2015 has allowed him to continue to develop his vision as a landscape painter. He has been exhibiting in New York and surrounding areas in several group shows, three solo exhibitions, and in 2010 became a Junior Member at the Salmagundi Club.

It is at the Salmagundi Club where Luis was reacquainted with Monotype printing which has become an important part of his practice.  The process has allowed him to explore and use what he has learned in painting the landscape outdoors to execute images from imagination and memory.